We headed to Neurum Creek Bush Retreat recently for the weekend. A friend of ours organises a weekend there each year for his birthday and invited us along this year.

I’d heard a lot about it from friends and family who had been camping there before and was really looking forward to seeing it. I knew that it said it was kid friendly, it had a creek, hot showers, and you could have fires. We went armed with bikes and a bag of marshmallows (and lots of warm clothes). 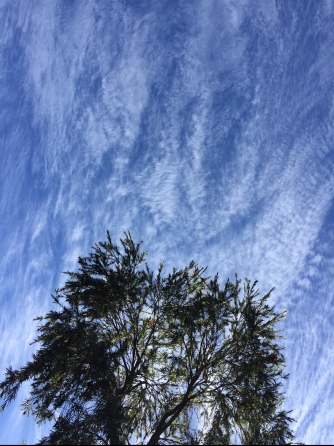 This was the sky during the day – beautiful Queensland winter weather. This was me under a tree while the kids ran around having a nerf gun battle (complete with safety glasses). It was cold at night but we were fine in our camper wearing two layers of clothes and under two layers of sleeping bags. Our friends in tents had powered sites and ran heaters to stay warm enough overnight. 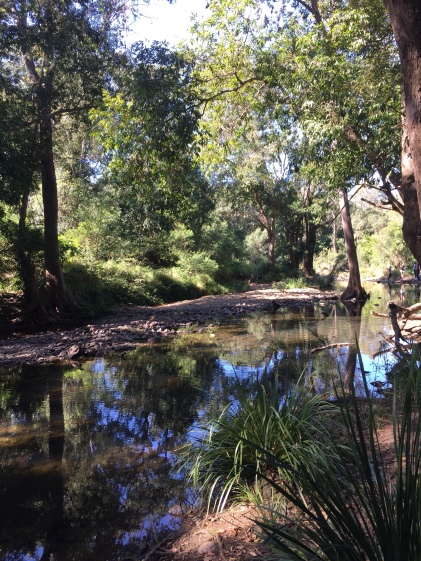 Our little ones had said that they were most looking forward to seeing the creek and did spend a fair amount of time exploring. There’s a pathway that goes beside most of the creek, and we went from one end to the other, looking at the water and climbing over rocks. The small people waded into the water even though it was freezing cold. 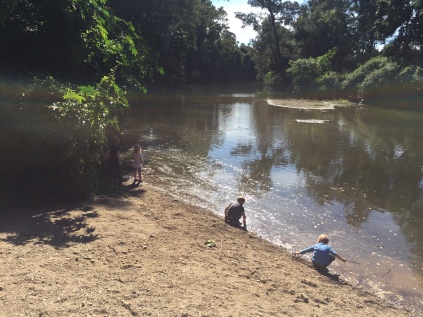 This is down the deeper end of the creek (it still wasn’t that deep at the moment). It had a sandy bank. The best spot we found was near one of the day use areas, as the adults could sit in the shade and watch, and the kids could play. Most of them fell into the creek at one point over the weekend while balancing on rocks – or not balancing on rocks, I suppose!

I didn’t get any photos of the bike track, but that was a highlight for most of the kids. The ones still on training wheels were a bit sad they couldn’t use it properly, while those on pedal and balance bikes had lots of fun. Even a few of the adults had a go on the jumps during a quiet moment when there wasn’t any kids on there. There was also a sand pit in the same area so little kids could play there while watching the older ones ride.

There were also kids riding bikes everywhere, with a strict rule on cars going at walking pace. This meant all the kids could practise their bike riding on the dirt roads around the campground. A few of the adults had bikes too, for exploring the camp ground, quicker trips to the toilet or riding to the camp shop for supplies (they sell basic supplies and ice creams).

There were a few sites a bit further away from the others that would be great if you wanted to be a bit apart from other people. We had a flat site near the creek that meant we were in prime bike riding territory and could easily watch the kids going up and down the track.

The sites were also lovely and green. I’m not sure if it was a result from recent rain, or if they’re carefully managed to make sure that they’re not overused, but they were grassy too which meant we could spread our picnic blanket out under the shade of a tree on our site, and we read books for some afternoon quiet time.

We were really impressed with the campsite. They even had an ice cream truck visit Saturday afternoon, and a coffee van visited on Sunday morning. I’d like to go back in summer when it is warmer and spend some time in the creek!