We were lucky enough to get a toddler free weekend a few weeks ago and decided to go camping at Lake Maroon, along with a few friends. We took our boat and had a fantastic time, I didn’t even open one of the three books that I took with me, I was too busy chatting away with our friends and catching up. What luxury it was to be able to chat without small children demanding our attention and making us forget what we were talking about!

We camped at Lake Camp Fire which was all right – it was $15 per person per night, and their camp sites that were right by the water and looked awesome were closed, although we were told they’ll be open again by November, along with a new shower and toilet block. So we were camping away from the lake, although still with a view of it.

We could light a fire though, so we took advantage of that, sitting around the campfire from 6pm until we decided to go to bed. It was a bit cold overnight, so I was sleeping in track pants, shirt, jumper, beanie, and two layers of socks, along with an extra sleeping bag spread over the top of our sleeping bags. I was toasty and warm as long as I didn’t stick an arm out of the sleeping bag.

Our air bed also slowly deflated overnight until we woke up at 4am and finally admitted defeat and got up to put some more air into it. That’s pretty standard for our camping trips though, and at least our tent held up this time (although it didn’t rain to test it out). Our first camping trip together, the air bed deflated and there was a heavy rain shower that led to our tent leaking then collapsing a bit on us. I did wake up to a few drips of condensation on my face, but nothing too bad! 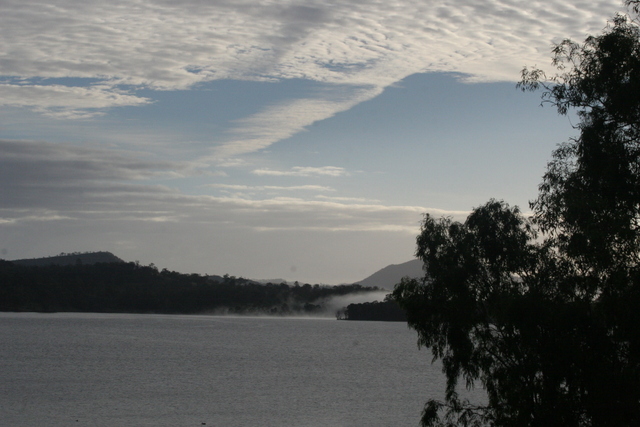 The lake itself was very quiet, I think it only had one other boat on the water most of the time we were there. There were other boats around, but only seemed to be two on the water at any one time. The lake is small but that didn’t matter so much with the lack of boat traffic.

We had a great weekend away, and we’re hoping to do it again when the weather warms up, although we’re still discussing if we’re brave enough to go camping with children along!