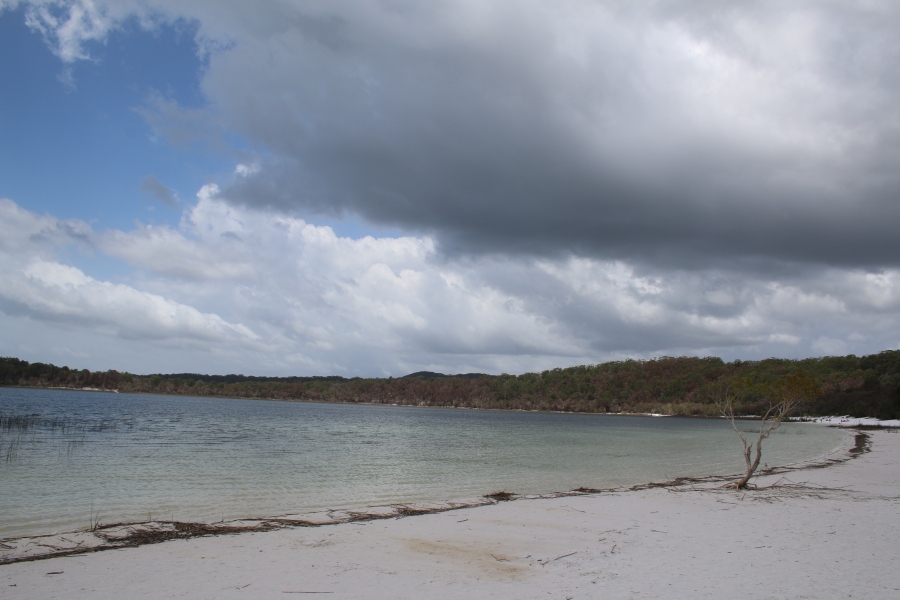 I forgot to add in the last post that after we got back to the resort on our second day, we decided to take a walk down to the beach. We walked across the resort and out a gate near the old pub, down to the beach. I spent so many hours down on Eurong beach many years ago, and we decided to go explore one of the many small creeks that come out of the dunes and down across the beach. We were floating pumice stones down the creek, when we saw little pawprints nearby. “Look kids!” I said, confident in my skills, “A dingo pawprint! That means that a dingo has gone past here at some point today.”

A minute later we looked up to find out that my bush tracking skills leave a lot to be desired, as “some point” was “a minute ago”, and the dingo pup was heading back towards us. I am not a big fan of dingoes, but I could see it was a pup, so at this point my main concern was if there were adult dingoes nearby that we couldn’t see.

At this point we picked the kids up and retreated behind the safety of the resort fence, while explaining to them that while we didn’t think the dingo would hurt us, it was a puppy and very curious, and we had to teach it that people were boring and not worth going near. At one point it started trotting in the same direction as us and I was afraid it was going to follow us back to the resort – then we saw there was another pup down at the beach and they joyfully ran towards each other and reunited.

We’d had a few talks with the kids about what to do if you saw a dingo – stay calm, tell an adult, walk away, never ever run and I was surprised that they seem to have listened. My eldest is scared of dogs and tends to run literally screaming away which is fine (although not) when it’s a slightly bemused elderly Labrador on a leash at the local park, but not okay for a dingo encounter. He proudly told me afterwards, “I stayed calm and didn’t run or scream”, so it must have sunk in.

We went for a walk down the beach again the next day, this time using the main gate of the resort and saw that they have “dingo sticks” by the pedestrian gate, suggesting you take a large stick with you to protect yourself if necessary, and return it after your walk.

On our last full day on Fraser, we decided to head to Lake Birrabeen. We also started out the morning with me driving the car – my first time driving on Fraser since I was a teenager and my older cousin decided to teach me how to drive and I got bogged in our driveway (it was a boggy driveway, but still!). This time went better (although last time I got from the shops to the house without issue, it was just the last metre that was the issue), although it was nerve wracking in parts. I chose to drive from Eurong to Lake Birrabeen thinking it would be a well used track and therefore quite easy, but it didn’t turn out that way. Luckily every time we came across someone going in the other direction, there was a handy passing bay, and there weren’t any issues there.

It was an overcast day, so the lake doesn’t show up in photos quite as nicely as Lake Mackenzie did. Lake Birrabeen has less visitors though, although there a tour group there when we arrrived (one that we’d seen the day before at the Champagne Pools) and another family down the other end of the lake – you might be able to see them in this photo if you look closely.

We went for a swim, made a few sand castles (the sand at the lakes isn’t that good for making sandcastles with as it is so fine, they tend to collapse) and ended up staying longer than planned as the kiddos were so happy just pottering around and digging in the sand. Then they insisted on going for a walk down the other end of the lake and their legs ran out of energy at the far end and they wanted to be carried back.

We went for a drive over to Ungowa with a plan of going fishing, but the boat ramp is now closed to pedestrians because it’s collapsing, and no longer safe to access, which means there’s no access to the beach either. We decided to go for a drive south back to the beach as it looked quicker, and to our  surprise, we stumbled across the best road on the island. It was smooth and easy, and I’m guessing it used to be a main thoroughfare when there was logging on the island.

We made it back to the beach, drove back to Eurong, and finished the day with ice creams from the bakery and another walk down to the beach – no dingo sightings this time.